I’ve spoken at a few conferences recently about the use of audio feedback in products. I say products, because this thinking spreads across both physical and digital interactions.

One of my arguments for why we should care about audio feedback is…as a result of tens of thousands of years of evolution, our instinct to survive has been partly, and importantly led by our ability to react to danger – the startle reflex – as it is sometimes referred to. We as humans are not unique in this respect, Attenborough has shown us examples across the whole of the animal kingdom where pointy ears have grown to listen out for pointy sounds – if you can hear a danger that you can’t see, life may turn out to be a little longer for you.

So I decided to see if I could prove in front of a live audience that as human beings, we react to sound quicker than we react to light and allowing me to sensationally declare that sound travels faster than light. The first time I conducted this ‘experiment’ was in front of a live audience – I truly had no idea what the outcome might be. I had consulted a few neuroscientists, none of whom wanted to put their name near this experiment. I asked one of them the question:

Question – What travels faster in terms of human
reaction time, sound or light?

“I think probably they are about the same – and an initial orientation response (or saccade) will be about the order of 100ms or a tenth of a second. Auditory information is initially processed more quickly in the cochlea than the corresponding visual retina (and ganglia cells) but then it is actually passed to the same non-cortical place (the superior coliculous) where interestingly the visuatopic (visual) and tonotopic (sound) maps are in register with each other in real space.”

The word that stood out for me in his response was ‘probably’, so I decided to go for it, this is what happened next…

So, my experiment went as follows…2 volunteers from the audience would join me and sit in chairs back-to-back. One would hold a my Surface device and would be looking at the screen, the other would wear a set of headphones which were plugged into the Surface. Each volunteer would be holding a quiz buzzer. When the button is pressed the buzzer sounds and either the red or green light is illuminated to show who was fastest to react. 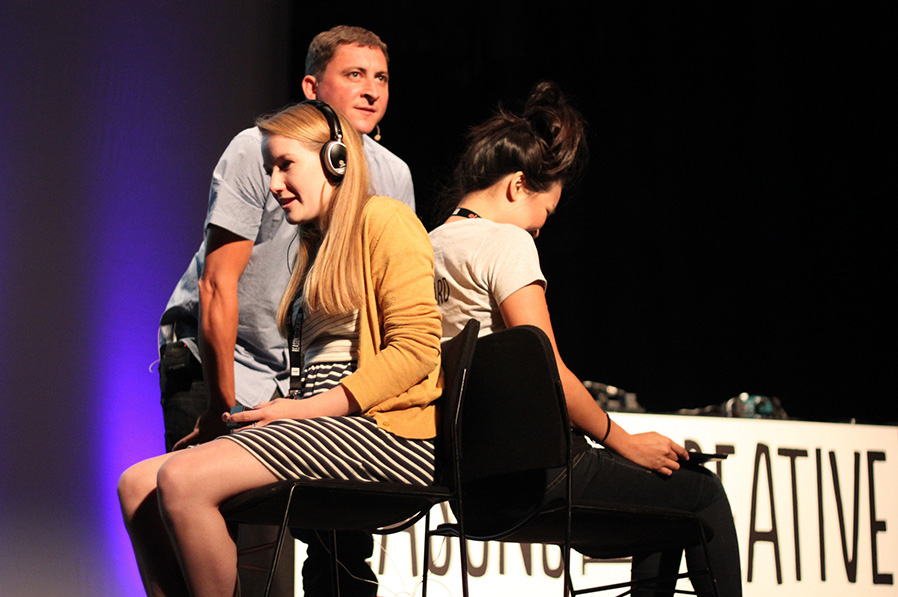 Once this was set up, I played a video on the Surface. It is a simple film, which changes from black to white and when it changes, a sound is played. So the person looking at the screen is reacting to the visual and the person with the headphones is reacting to the audio. They had one ‘test’ go so they knew what to expect and then 3 chances to see who reacted first, then they swapped screen/headphones.

Now, admittedly it wasn’t the most controlled of experiments and the sample size each time was pretty small (2 people) but each time I did this (twice) the results were clear – the person with the headphones reacted quicker than the person looking at the screen.

From this, I am able to conclude, that sound travels faster than light from a neurological perspective. And that’s *why* we should put effort into designing great audio experiences for everything from our washing machines to our mail software.